The 85th SPA Conference was held at the Belfry on the 15th September and was attended by 70+ delegates from 42 companies. Chairman, Tim Gray opened the conference by welcoming everyone and made special mention of new member John McDonald of flexographic ink supplier Flint Group.

Tim then introduced an economic update from KPMG, which confirmed that the UK is forecast to continue growing despite headwinds faced by the Eurozone countries. This was immediately followed by a Corrugated Industry Update by Raj Bhardwaj of Know It All packaging newsletter. The joint forecast is for UK corrugated growth of 2-3% this year and next.

Graham Wallder of MM Karton then delivered the Supplier Spotlight – giving an overview of the parent company (Mayr-Melnhof Group) and then educated delegates on their White-Top Coated Containerboard Liner, which they currently supply to the sheet plant sector through Board24. MM Karton has nine paper and board machines at seven mills in four countries with a capacity of 1.66 million tonnes – which they sell to over 100 countries. Graham reminded delegates that the decorative print market is forecast to grow by 5% annually in the next four years, which their product range is well placed to support. He also highlighted the growing importance of decorative printing and the increasing demand for 3 and 4 colour flexo print. 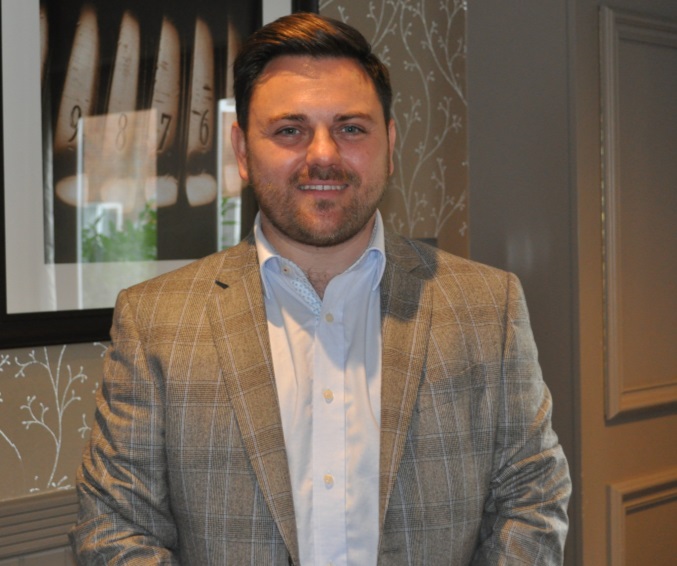 John Chapman of QMS (see picture above) then gave an enlightening presentation which detailed how they will be supporting the SPA’s latest initiative – helping members to gain ISO 14001 environmental accreditation at an excellent price thanks to the ‘group deal’ that the SPA has negotiated for members. In turn a dozen companies confirmed that they would be availing themselves of the opportunity to introduce ISO 14001 to their organisation. 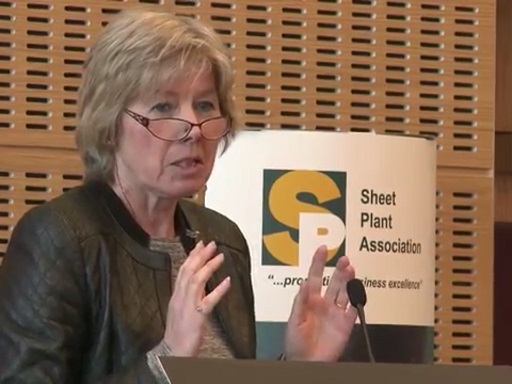 The inestimable Anita Coaster of Coaster Legal (see picture above) gave an update on capability and disciplinary procedures, with examples and case studies to help illustrate best practice and recommended approaches for differing scenarios. As ever, her unofficial double act with Cliff Graham (who gently heckled with his customary wit) proved entertaining as well as informative. Tim underlined that advice from Anita is available free of charge to SPA members via the SPA telephone Helpline. 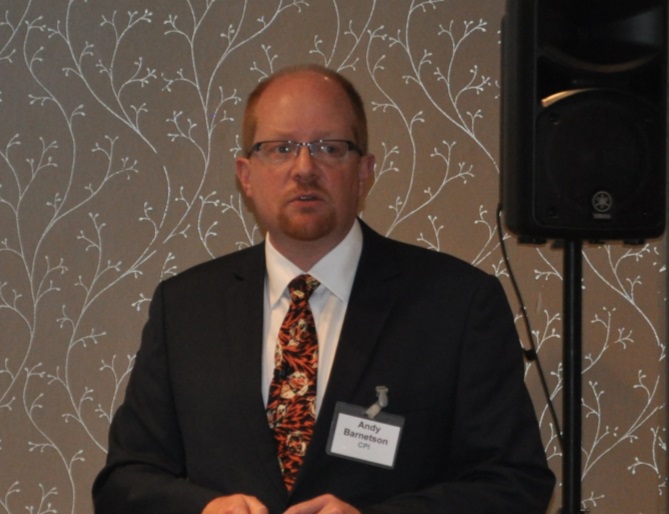 The paragon of competence that is Andy Barnetson of the CPI (see picture above) gave an update of the activities of the Corrugated Promotional Committee, which is jointly funded by the CPI and SPA. He confirmed recent promotional activity:

Andy Ely of TUV gave an update on safety legislation with his usual blend of engaging humour and unsettling honesty in terms of the dangers that industry colleagues potentially face if they don’t remain constantly vigilant when it comes to safety. As well as the dangers of working in confined spaces and lone working, there was a notable focus on risk assessments. Andy reminded members of the importance of regular H&S Audits, which can be booked through the SPA at a discounted rate. Andy also reminded SPA members that they are welcome to call him on the free H&S Telephone Hotline, which gives members 15-20 minutes counsel. 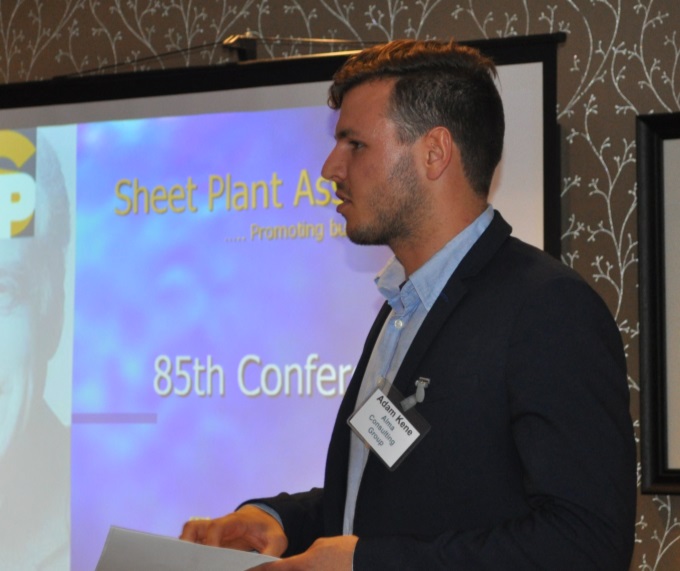 Adam Kene of Alma Consulting Group (see picture above) gave an encouraging update on progress of the SPA R&D Tax Credit Initiative. To date £936,000 has been recovered from HMRC for SPA members and a projected £1.6m will be realised for these businesses in due course. So far, SPA members have realised an average saving of £35,000 per tax year. Alma Consulting has proven experience of working with box plants to put together a successful case for tax credits – he would of course be delighted to work with other members of the SPA who wish to recover R&D Tax Credits. 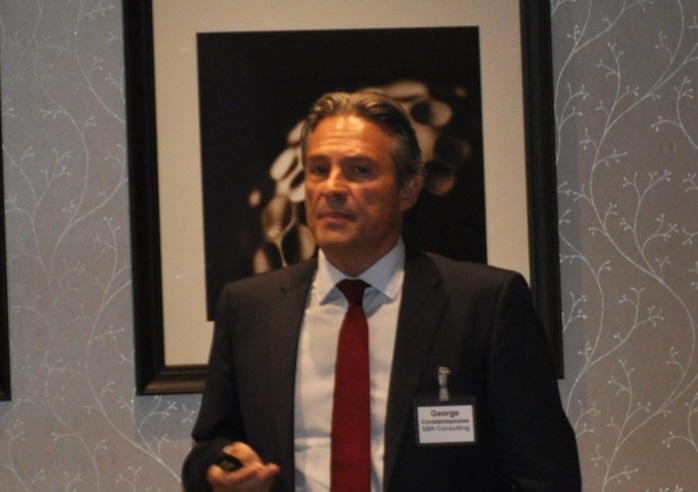 George Constantopoulos of SBR Consulting (see picture above) gave an impressive preview of the Sales Managers’ Masterclass to be run on 29th September for SPA members. George Confirmed that the SPA Masterclass already had 28 members booked to attend and was likely to be oversubscribed. The Masterclass is free of charge to members and has been fully funded by the SPA. The Masterclass will focus on - types of salespeople, understanding what makes them tick, managing/motivating them in the right way/style &  what controls/measures to put in place and how to review them…. To book your place go to the Events section of the SPA website...

Guy Thomas of Abaca Systems gave an update on the latest version of the web-based SPA Dashboard, which now includes a significant depth of sales and operations reports. The Dashboard allows SPA members who use the Abaca business system (which is the market leader in the UK) to remotely keep their finger on the pulse via their iPad or laptop computer.

Supplier members were invited to formally sign up to exhibit at the 2015 UK Corrugated Industry Trade Show, which will be run at St. Georges Park, Burton on Trent on the 18th and 19th of March next year. There will be 45 exhibitors booths (of which 23 have already been provisionally booked and are in the process of being allocated), with the first day dedicated to SPA members and the second day thrown open delegates from the wider corrugated industry.

Please contact Julie Jarvis via office@sheetplantuk.com if you wish to exhibit.

The warm-hearted soul that is Michael Houlston gave an introduction to The Printing Charity, whose altogether noble mission since 1827 has been to help people who work in any organisation that produces a printed output:

The Free Bar was followed by dinner which gave delegates plenty of socialising and networking time.

As an Association we are not in a position to formulate, agree and disseminate 'Best Practice' in this area as the situation and agreed advice is
read more

Employment Law changes from April - we've got it covered !

Your Committee is arranging a Trip to Orlando, Florida to attend TAPPI/AICC's SuperCorrExpo 2020. This is the largest Corrugated Trade Show is the
read more